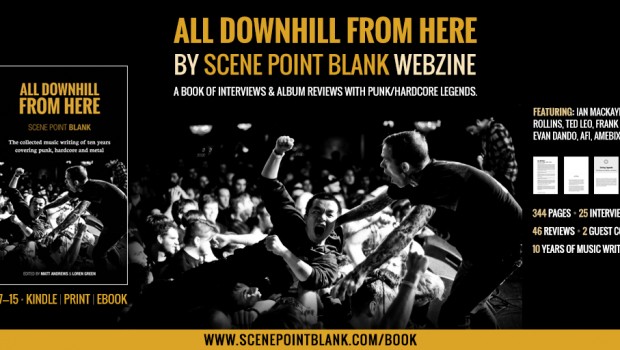 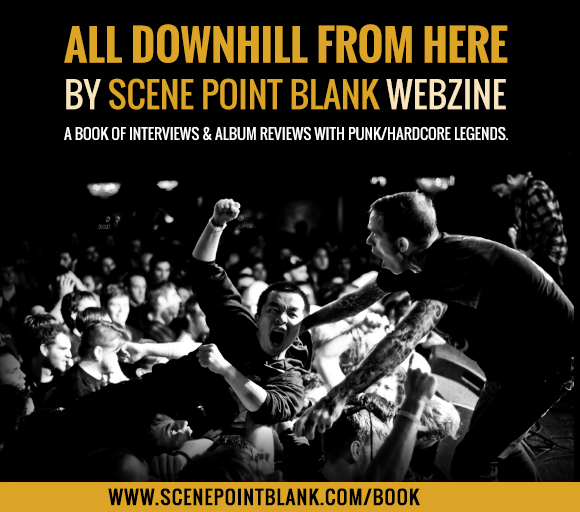 All Downhill from Here, a book compiled from a decade of music writings in Scene Point Blank, a punk webzine, reads like a eulogy to a bygone era in the music scene.

“That time is gone and we’re not getting it back,” says Matt Andrews, one of the webzine’s founding members who compiled All Downhill from Here along with Loren Green.

Andrews, who started Scene Point Blank when he was 16, says the team launched the webzine in 2003 as a tool for people with similar interests in punk music.

“We all wanted to share the music and there was no real easy way to do that because MySpace and Facebook didn’t exist, it was mostly a word of mouth thing,” says Andrews.

All Downhill from Here encapsulates the punk scene in the aftermath of the alternative boom in the ’90s, at a moment when big record labels, who made rock stars of bands like Green Day and The Offspring, were feeling the pressure from music sharing platforms like Napster.

Without the presence of big labels, bands had to promote their own work and were more accessible to fans, making it possible for niche publications like Scene Point Blank to get interviews.

The webzine’s columns, interviews, and reviews put a spotlight on living punk legends like Ian MacKaye (The Evens/Fugazi/Minor Threat), veterans like Tim McIlrath (Rise Against) and solo troubadours like Frank Turner.

There are even a few Canadian connections, with Toronto’s Fucked Up, a 2009 Polaris Music Prize winner, featured in the punk rock veterans section.

“I remember that period as a very exciting time,” Damian Abraham, the front man for Fucked Up, says of his 2006 interview with Scene Point Blank.

“Webzines allowed for small pockets of fans to band together and give voice to divergent groups,” says Abraham.

“It allowed bands like us to ultimately get to a place where we could get signed to a record label and put out an album on a world-wide level.”

The book showcases the writings in their original form, with little editorializing. Many of the interviews were conducted by young aspiring music journalists over email or done hastily with band members as they walked on or off the stage at a show.

“It’s not about promoting our best stuff, as it is a historical record of what took place,” says Andrews. They wanted to share the cringe-worthy moments, he adds, like when he asked Tiger Army’s lead singer-songwriter Nick 13, about what food he likes to eat in a 2005 interview.

“If the site died tomorrow – we’ll have this record of this book – even if everything else disappears.”

The webzine peaked in 2010 with tens of thousands of daily viewers.

“We had two to three times as many unique readers as we do now,” says Andrews. He adds that although the number of viewers has declined, the number of page views have increased.

“The readers we’re left with are more loyal and read more pages on average than the larger group did, which is nice.”

Despite the decline in viewers Andrews is optimistic, a fact reflected in the book’s title.

The name All Downhill from Here, is based on lyrics from a song by The Evens, Ian MacKaye’s band. The song “Shelter Two” includes the refrain, ‘‘it’s all downhill from here.”

Andrews, who interviewed MacKaye in 2006, says that the punk icon told him, “If it’s all downhill from here, it means you’re at the top of the hill right now and in a pretty good place with your life.”

The history of Scene Point Blank tells a story of the do-it-yourself attitude and importance of community in the punk scene.

The webzine’s founders all met on a message board for a California-based punk band called AFI. In the absence of social media tools, message boards were the hub for music fans – they were virtual communities.

They created Scene Point Blank in 2003 as a place to expand their musical interests beyond the work of one band.

Perhaps the quote that best exemplifies Scene Point Blank in its prime is from a 2012 interview by the webzine’s founder, Matt Andrews, with Larry Livermore from The Lookouts, a punk-rock band whose 12-year-old drummer, Tré Cool, went on to play for Green Day.

“I think punk rock today is more diverse and creative and full of potential than it ever was . . . precisely because there’s no expectation of fame and fortune.”

While the webzine’s focus is music, there’s a political undercurrent, with punk icons taking a stand on different issues from vegetarianism to the American election.

In a 2006 interview, Rise Against’s Tim McIlrath, tells Toronto based contributor Graham Isador, “I’m a big believer in the fact that sometimes revolution happens more often at kitchen tables than it does at some imaginary ‘front line’.”

Although the site initially began with a focus on punk, it now covers indie, hip-hop, pop and jazz.

Last year they published a tongue-in-cheek review of Justin Bieber’s Believe after Island Records, which represents Bieber, sent them a promotional copy of the album.

The review is written as a transcript from a counselling session where a therapist tries to cajole the writer to admit that she likes Bieber’s album.

The therapist states, “I think that you’re afraid to listen to something different. I think you’ve created this safe little bubble of music you can enjoy while still feeling superior to others, and I think the mere thought that you might actually enjoy something that’s simple, that’s catchy, that’s mainstream, threatens your sense of identity.”

To buy the book visit www.scenepointblank.com/book