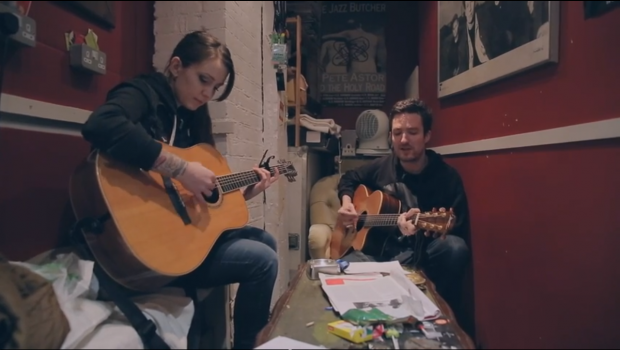 After years of funding her music with donations from fans, Canadian singer-songwriter Billy The Kid has landed a record deal with Xtra Mile Recordings.

The London, England, based Xtra Mile is home to artists like Against Me!, Tim Barry, Dave Hause, Northcote and Frank Turner.

Despite a dozen years of self-producing albums, Billy Pettinger – that’s her real name – says she feels at home with Xtra Mile, comparing the signing on the label to getting invited to a party full of her friends.

At five-foot-nothing, Vancouver’s Pettinger is all voice.  She has a range that expands across various genres, from punk to rock, to country and folk.  Regardless of which genre she’s tackling, there’s an authenticity to her sound – it’s polished but strikes a raw chord.

To date she’s released seven albums, four of which are punk. Her early work includes fronting the rock band Billy and the Lost Boys, but most recently she’s worked with artists such as Garth Hudson (The Band/Bob Dylan), Randy Cooke (Ringo Starr/Dave Stewart) and producer Jamie Candiloro, best known for his work with Ryan Adams, R.E.M. and Willie Nelson.

Pettinger, who’s known as the do-it-yourself poster girl of Canada’s music scene, funded her previous albums by travelling across the country to attend fundraisers, anniversaries, birthday parties and private concerts.  She would even go camping, white water rafting and rock climbing with fans to raise money.

Under the Xtra Mile label, she’s able to focus exclusively on the music.

Unlike her previous solo projects, her upcoming, yet-to-be-titled album, is a collaboration with British folk/punk singer-songwriter Frank Turner. He has performed alongside bands such as Green Day and Billy Bragg, and was featured in the London Olympics’ opening ceremonies in 2012.

“It’s a bad-ass rock record – tough as nails. It’s basically Frank and I being in a band together,” says Billy.

Pettinger and Turner travel in similar musical circles. They both performed in parts of the Revival Tour – an acoustic singer-songwriter showcase from 2005 to 2013 across North America, Britain and Australia.  They are also both featured in Chuck Ragan’s book The Road Most Traveled – a compilation of stories about touring as a musician.

Yet the two didn’t meet until last summer, when Pettinger opened for Turner’s Toronto show.

Turner says he got involved in the project when Charlie Caplowe, Xtra Mile’s founder, sent him the demos and asked his opinion.

“It was a sneaky move on his part, because he knows me well enough to know that if I invested the time in listening through, I’d probably want to get further involved,” says Turner.

In addition to helping with production, Turner plays bass on the record, as well as the occasional guitar solo. The album also features a duet between the two.

“It was a learning experience for me, to a degree, though I had very passionate and strong opinions about how to make the record right from the get-go, but we were constrained by budget, time and so on,” he says.

Notwithstanding the restrictions, he says he “found a way to make a virtue of necessity, and I like to think we found the soul of the songs and brought it to the light.”

Pettinger says working with Turner was one of the highlights of making the album.

“The biggest thing, honestly, was the actual process of it. I’m going to look back at it for the rest of my life. I can’t ever remember it being so easy; there was a real fluidity that made it natural. I think that will show up in the music.”

Pettinger continues to be influenced by her do-it-yourself mentality even though a label now represents her. Leading up to the announcement of her new project, she released YouTube videos of 31 cover songs, one for each day of January.

The final song was “This Sure As Hell Ain’t My Life,” her duet with Turner.  The sneak peak was a surprise to fans who had no idea that Pettinger was in the U.K. and working with Turner on a new album.

The song’s music video is a stripped-down production featuring Turner and Pettinger in a cramped room strumming a soulful song about the disappointments of lost love and dreams.  While the song is simple there’s a spark in the pairing of their voices that speaks to the intensity of their musical connection.

The new album, which features 13 original songs including “This Sure As Hell Ain’t My Life,” will be released on May 26.